Last week, Princess and I had our First Annual Mother/Daughter Weekend.  When I broached the subject with her a while back and asked where she wanted to go, I was expecting something along the lines of Disney or the beach.  Nope, not Princess.  Her one -  and only choice -  was Paris.  I think this bodes ill of my future financial stability!  Either way, she and I headed to Paris and what a trip it was! 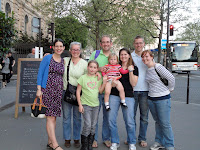 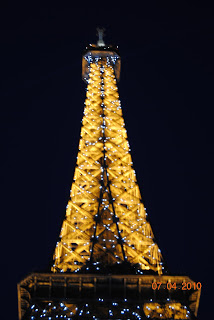 There were, of course, some things we just HAD to do, and so we did.  Our hotel was just a hop, skip and jump away from the Eiffel Tower so we headed there our first night.  Did you know that it sparkles for five minutes every hour at night?  I didn't.  We were just standing there looking at how beautiful and huge it is and then it started sparkling.  Amazing!  It made the Tower even more beautiful.

Thanks to Night at the Museum: Smithsonian, Princess wanted to see The Thinker and Venus d'Milo.  There was no way Princess was going to Paris and not seeing these two statues.  If you've seen the movie, you won't be disappointed to hear that she did the "Boom!  Boom! Fire Power!" line standing in front of The Thinker.  If you've not seen the movie, you have no idea what I'm talking about and you've missed a fairly funny movie!  What was really great, is that once we were in the Louvre and the Musée Rodin, she was captivated by all the other works of art.  She was a bit disappointed at the size of the Mona Lisa, but was glad the eyes didn't follow her around.

Having studied Napoleon, we also had to see his tomb.  As you would expect from such a small man - a HUGE tomb.

And in a nod to the children in the group, we did a day trip to Disney Paris.  I love me a good amusement park, and Disney Paris did not disappoint.  But my recovery time for those rides that include "360〫inversions" (as described on the rides' signs) is not what it used to be.  Man I consumed a whole lot of ibuprofen that day!

As you would expect, we ate like champs during this vacation.  I swear I needed a second seat on the way home, but it would not have been a successful trip otherwise.  Thankfully, Princess is not a picky eater.  Her nickname is the Seagull if that gives you any indication of just how unpicky she is.  We ate copious amounts of cheese, pork (for our Saudi posted friends), escargot, pasta, and steak.  And you cannot go to Paris and not have croissants, chocolate and, of course, crepes!  And oh, the Crème Brûlée.  The best meal of the trip (and there were a LOT of good meals on this trip) was our last night.  We found this cozy restaurant (Chez Plumeau) tucked away on Montmartre and we were set.  The food was pure perfection, the service sublime.  All in all, it was the best way to end the trip.

I must say, and Princess concurred, it was a very successful trip.  The weather cooperated, we were able to get around easily, we saw the things we wanted to see, caught up with some really great friends, and we were able to see two of them run.  Princess is already compiling a list for next year's trip.  I had better start saving now - I heard her mention Rome.
Posted by Lauren at 10:54